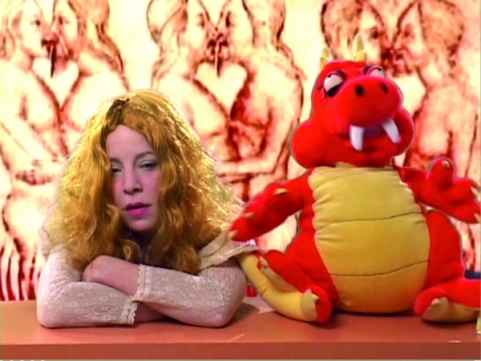 In Alex Bag’s ironic performance videos, the artist adopts a series of personae to create droll conceptual parodies. With her signature deadpan delivery and deliberately low-tech style, Bag mixes the vernacular of pop culture with irreverently humorous monologues. Performing in multiple guises amidst fragments of pop detritus, Bag skewers the tropes of consumer and media culture. Questioning how we define ourselves in relation to television, fashion, advertising and the artworld, she creates mediated parodies that teeter between celebration and critique.

In this untitled video, commissioned as part of her 2009 installation at the Whitney Museum, Bag imagines herself as the host of a nightmarish children’s television program, clinically depressed, dissociating from reality, and unburdening herself to a mean-spirited dragon puppet. Bag elucidates the mental state of her character (using chroma-key technology) with wildly shifting backdrops: cartoon bubbles, medieval paintings, a blazing inferno. With actual children as audience-participants, the show is in a variety format: an animal trainer spouts pop-psychology with a live monkey and snake, a wheelchair-bound man sings Neil Young and David Bowie songs, and Bag, in a black wig, reads aloud from Sartre’s Nausea.

As with Bag’s other TV-centric works, such as Gladia Daters (a fake reality show) and The Artist’s Mind (a spoof on the PBS-style documentary) Project for the Whitney Museum is both a broad pop-cultural parody and a satire about the vapidity of contemporary art-making. As Alan Licht writes in Modern Painters, “The rapport between Bag and the dragon resembles that of a spacy art student and an acrid professor during a particularly nasty art school crit.” Bag fumbles and eventually abandons her attempt to explain her creative intentions for the project, shrugging in apathy.

The work is also autobiographical; the artist’s mother hosted two shows for children on New York’s CBS affiliate in the late 1960s and early ’70s, the The Carol Corbett Show and The Patchwork Family. Although inspired by Corbett’s talents as a performer, Bag was confounded, as a child, by her mother’s stage persona. She writes in Artforum, “When I was really young, I found the shows disturbing; there was always an audience full of children with whom she’d share stories that she already told to me.” The host/artist’s sense of personal despair in the adult world is a repudiation of the “self-esteem-boosting” potentialities of educational television and solo museum shows.

One thought on “Alex Bag”